Quite often, corporate firms may not even need to look any further for human resource solutions to augment their business processes and operations. On several occasions, we’ve recommended neighboring cities, provinces/states and regions within the same country to corporate firms to migrate their business processes and operations. Onshoring typically works best for companies whose operations are very stringent on maintaining uniformity in communication, cultural relations within the perspective of business processes, same/similar time zones, strict government regulations on the composition of employees of the company and overall unexpected increased operations costs for nearshoring/outsourcing to other hubs. Companies that are typically best suited for onshoring include local non-profits, government backed/nationalized corporations and social services focused companies.
Given that several countries do not have a wholly standardized national/federal codified set of protocols and policies on human resources, different regions/states/provinces may have different remuneration policies. For example, whilst the federally mandated minimum wage in the United States for 2019 is $7.25, most states have minimum wage stipulations that exceed or are less than this federally designated minimum. For example, Washington D.C. mandates a minimum wage of $14 per hour effective July 2019 whilst Georgia permits corporations not subject to the Fair Labor Standards Act to pay the state mandated minimum wage of $5.15. Differentials in minimum wages across a country permits corporations experiencing unfavorable conditions in one state to migrate to the more favorable states to appropriate their favorable laws and regulations 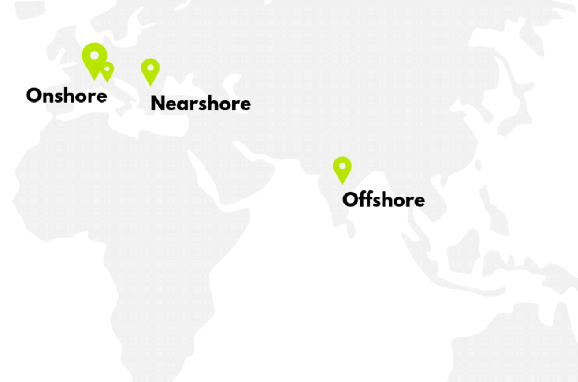 We value data security and our skilled professionals will keep all your customer data fully protected. This is important because customers feel more connected to your business if they are certain that their personal information is secure. As more consumers today worry about data privacy, our onshore consultants will implement the right steps toward providing the highest levels of data security that are compliant with municipal, provincial/state and national/federal laws. In fact, studies now show that onshore companies are data security and privacy conscious despite being within the same geographical borders as the parent company.

While it might cost slightly higher to onshore your human resource solutions and business processes, your business can enjoy greater overall efficiency especially in the management of all your business processes. Partnering with our team of representatives skilled to communicate efficiently with customers, your business will enjoy a great deal of time saving and clients will ultimately have a positive experience. Our onshore call centers can adequately handle any complex issues your clients may have. Smart businesses ultimately understand that our onshore solutions can provide better customer experience and lead to substantial cost savings in the long-run.

By providing our clients with versatile onshoring solutions, businesses can choose the options that best suit their specific needs. If your business aims to improve customer experience while remaining cost-effective, our team of specialized consultants will give you the guidance that you’ve best desire.

In addition to improving customer experiences, our specialized experts understand that quality services/ products are key to consolidating your brand. Having an experienced team to build your brand is the only way to maintain customer loyalty and encourage repeat business. And with the positive impact surrounding onshoring endeavors, businesses no longer make decisions merely based on cost. For certain businesses, it therefore makes sense to consider onshoring your business processes by bringing them close to home.

Get in contact with our versatile onshoring consultants to learn how you can benefit from onshoring your businesses processes with Corpshore Solutions.

Call now to book an appointment or schedule a consultation

Get the latest updates on the global BPO industry as well as trends, insights and novel service options when you subscribe to our periodic newsletter!